What is a Microprocessor?

Microprocessors are only made up of a CPU that is a central Processing Unit and they are used to do many complex tasks. Along with a CPU we also need many other components to complete some tasks or processes. These other parts are connected with the processor using external connections.

(All the above operations are complex and they need to process the complicated data.)

What is a Microcontroller?

Microcontrollers are designed to do a specific task or any assigned task in loops. You need some special tools to upload the program on the controller chips. Once the code is uploaded on the chip we don’t need to upload it once again on the chip unless and until we want our microcontroller to do another task.

The process is fixed in the microcontroller and the output depends on the user inputs or inputs from the sensors or fixed inputs.

Difference Between Microprocessor and Microcontroller: 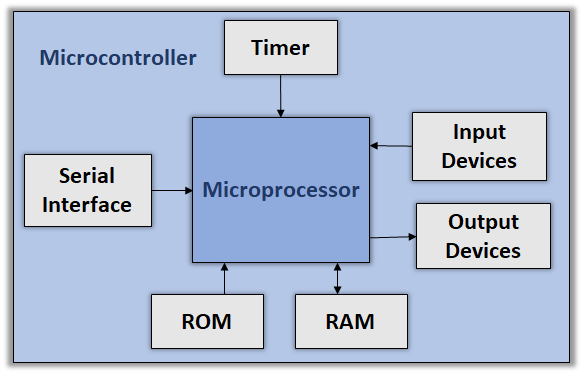 In the above image, we can see the microprocessor is part of a microcontroller with extra memory RAM, ROM, input-output devices, timers, etc.

Now let us learn the difference between a famous microcontroller board Arduino Uno and microprocessor Raspberry Pi.

Omkar Utekar is a Project Guide at Moonpreneur. He is very keen to learn new things mostly related to robotics and coding. He is very talkative person.

Vikas Shukla, an innovator at heart whose undivided attention is dedicated to technology. His inquisitiveness to create has led to several innovations in the field of hardware and software. He is the architect behind several successful learning products for students. These tool kits are a part of the curriculum at Moonpreneur.